Overview of Mobifone's purchase of AVG

In the past days, the public has been buzzing about the case of MobiFone Telecommunications Corporation (abbreviated as MobiFone) buying 95% of the stocks of Audio Visual Global JSC (abbreviated as AVG). For readers to follow the whole scene of this case from a legal perspective, the following HD Law would like to summarize this case in chronological order.

In 2015, Mobifone implemented a television service investment project in the form of state capital investment in buying 95% of the stocks of AVG with the amount of money USD 385 million, belonging to Group A projects - the Prime Minister's authority to decide on investment policy.

- First, Mobifone signed a consultancy contract with Vietcombank Security Limited Company (VCBS). VCBS hired AASC Auditing Firm Company Limited (AASC) and Hanoi - Ho Chi Minh City Valuation Company Limited (Hanoi Valu) to appraise AVG's price as of March 31, 2015, at USD 1.4 billion. However, the determination of the value of AVG as the above results is unfounded and VCBS has no valuation function.

- After that, Mobifone moved to sign the Valuation and Appraisal Service Contract with AMAX Valuation and Investment Consultancy Co., Ltd. (abbreviated as AMAX), determining the value of AVG's business as of March 31, 2015, was USD 718 million (according to the property method) and USD 745 million (according to the income method). However, valuation of AMAX is illegal, not true to the real value. But Mobifone still uses AMAX's valuation results to negotiate the purchase price. The final evaluation result to submit the project to the Ministry of Information and Communications (after subtracting other values) is USD 507 million. 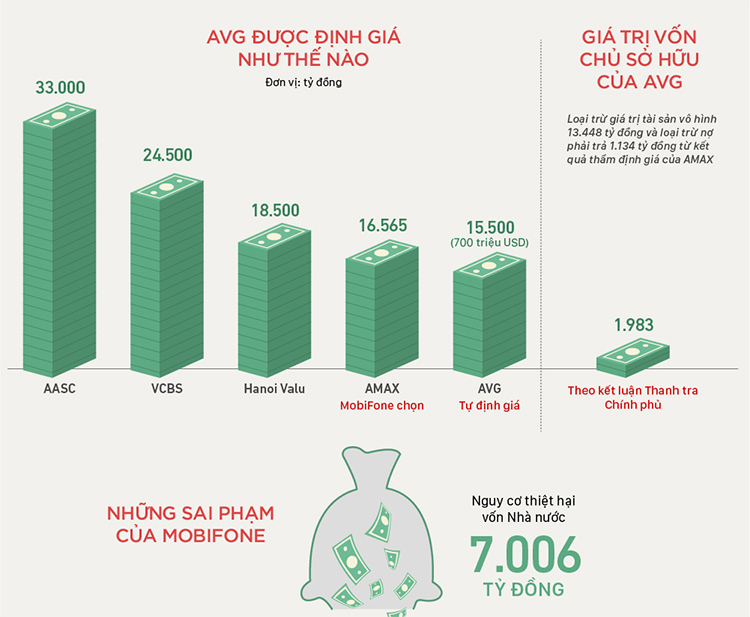 How is AVG priced? (Source: Internet)

On July 18, 2015, Pham Thi Phuong Anh, Deputy General Director of Mobifone signed a contract of valuation and appraisal service with AMAX on valuation of AVG enterprise.

On September 28, 2015, Mr. Cao Duy Hai - General Director of Mobifone signed Document No. 5441 / MOBIFONE-ĐT to report to the Board of members on the establishment of an investment project to purchase stocks of AVG, enclosed with the book of "Investment project to purchase stocks in Audio Visual Global JSC ", including the signatures of the Board of Directors: Cao Duy Hai, Pham Thi Phuong Anh, Nguyen Manh Hung, Nguyen Bao Long, Nguyen Dang Nguyen and 06 related heads.

On September 29, 2015, Le Nam Tra, Chairman of the Board of Directors of Mobifone signed the Document No. 63 / MOBIFONE-HDTV and submitted to the Ministry of Information and Communications to consider and approve the investment project, enclosed with the book "Investment project to purchase stocks in Audio Visual Global JSC”.

On October 2, 2015, there was a meeting between Mobifone and AVG on the agreement on the purchase price of 95% of AVG's stocks. The purchase price is valued according to AMAX's appraisal result of USD 385 million.

On October 23, 2015, Pham Dinh Trong prepared an evaluation report of Mobifone's television service investment project to submit to Nguyen Bac Son, Truong Minh Tuan and Deputy Minister Pham Hong Hai to consider and report to the Prime Minister about the decision on such investment policy, and two recommendations of Mobifone to allow Mobifone to continue using 04 granted frequency channels of AVG to serve television and telecommunications business as well as approve for Mobifone to use the State's investment credit capital (preferential interest rate) ... in the context that the own capital only meets a part of the investment capital needs.

On December 14, 2015, the Government Office issued Official Letter No. 2678 announcing the Prime Minister's opinion “Approving the policy for Mobifone Telecom Corporation to buy stocks of AVG to develop the television service and assign the Ministry of Information and Communications to carry out the above share purchase project in accordance with the provisions of law ”.

On December 25, 2015, under the direction of Nguyen Bac Son, Le Nam Tra, Chairman of Mobifone's Board of Members (representing the Assignee) and Pham Nhat Vu (representing the Assignor), signed the Transfer Agreement No. 2512 / 2015 / MOBIFONEAVG. After that, Mobifone's Chairman and 08 AVG shareholders signed 08 share transfer contracts corresponding to the number of shares held by each shareholder. The signing of the contract and payment are directed by Nguyen Bac Son, although there is no opinion of the Prime Minister yet. While in accordance with the law, this project must be commented and approved by the Prime Minister.

Damage consequences of Mobifone: After being re-assessed in accordance with the provisions of law, the value of AVG's assets as of March 31, 2015 is only USD 85 million (after subtracting total liabilities and net asset value). Therefore, the damage caused by the case is determined as: 280 million USD (calculated as 365 million USD (the amount Mobifone has paid to AVG) – 85 million VND (as net assets of AVG). In addition, Mobifone also suffered a loss of USD 4.9 million which is the interest of time deposit contracts withdrawn before maturity to pay to AVG. Thus, Mobifone has lost a total of USD 285 million

When the project was successful, Mr. Son received a bribe of USD 3 million from Pham Nhat Vu - Former Chairman of AVG. In addition, Mr. Son also claimed to receive money from Cao Duy Hai - Former General Director of Mobifone, amount of VND 200 million (about USD 8700) on April 30, 2015 and USD 200,000 for Le Nam Tra, former Chairman of Mobifone's Board of Members, on Lunar New Year 2016.

On February 23, 2019, Nguyen Bac Son and Truong Minh Tuan were prosecuted for a crime “Violating the regulations on management and use of public investment capital, causing serious consequences” specified in Clause 3, Article 220, Criminal Code 2015. On April 12, 2019, the BCA Investigation Police Agency issued an additional prosecution decision to prosecute him for the crime "Receiving a bribe" under Clause 4, Article 354, Criminal Code 2015.

The Supreme People's Procuracy prosecuted the indictment, group of 5 defendants including Nguyen Bac Son (1953, former Minister of Information and Communications), Truong Minh Tuan (1960, former Minister of Information and Communications), Le Nam Tra (1961, former Chairman of MobiFone Board of Directors), Cao Duy Hai (1961, former General Director of MobiFone) and Pham Nhat Vu (1973, former Chairman of AVG Board of Directors) colluded, accelerate the progress of buying and selling AVG with the amount much higher than the actual value.

HD Law will continue to update the readers on this case in the subsequent articles.